Moissanite is well-known for its distinctive fire and shine, but what’s behind that bright sparkle?

A closer look at moissanite's sparkle

What’s not to love about moissanite? It’s durable, highly scratch resistant, and not to mention eco- and budget-friendly! But what really sets moissanite apart from the often-compared-to-diamond are its fiery flashes of color in a rainbow of hues. Let’s take a closer look at the science behind moissanite’s bewitching sparkle as well as some of the best cuts and shapes to choose for maximum fire.

The science of sparkle

How does light move through a stone? And why does it even matter? You likely long ago passed your high school physics class, after all! In short: it matters a lot when it comes to a gemstone’s sparkle. How light travels through moissanite is the key to what makes it so unique: its fire. So, let’s break down the science behind sparkle. Sparkle has two major factors that can dim or enhance it: light and cut. When light enters a stone, it bends, and depending on the chemical makeup of the stone it will bend and bounce in different ways. Moissanite’s makeup promotes a whole lot of bending of light. As it moves, light bounces around facets within the stone and exits the stone again. This exiting light that has bounced around is what we perceive as white or colored sparkle. Easy peasy, right? But wait, there’s more!

You’ve also probably heard the phrase “fire, brilliance, and scintillation” before if you’ve looked into gemstones at all. What exactly do these words mean, and how are they not all the same thing?! Each term relates to a facet—ha, get it?—of “sparkle”, and they all have their role to play in moissanite’s signature colorful sparkle. If you’ve ever stared deeply into a diamond ring—and let’s be honest, we’ve all done it—you may have noticed spots of light and shadow within the stone. This is “scintillation”: the contrast created by these light and dark spots which produces a “blinking” sparkle effect as the stone moves back and forth. When light hits a stone, it reflects back to us through the top (also called the table) as flashes of white sparkle. These white flashes are what’s known as “brilliance”.

Last—but certainly not least—is “fire”. Fire is also known as “dispersion”, which refers to the way wavelengths of light “disperse” throughout a gemstone. White light is really a combination of wavelengths in various colors, and each one moves differently. Long wavelengths (red) bend the least, but short wavelengths (violet) bend the most. Imagine light moving through the air and entering a prism: the light splits into wavelengths that exit separately. Because these wavelengths all bend in different amounts, the result is a rainbow display of color! Ever seen The Dark Side of the Moon album cover from Pink Floyd? White light going into a triangular prism and coming out as a rainbow? That’s exactly what we’re talking about here. While moissanite has an excellent balance of all three aspects of sparkle we covered above, it’s best known for its prismatic fire. Below the colorless surface of moissanite is a rainbow of sparkle just begging to be revealed! But what gives moissanite its fiery personality?

For starters, moissanite has a higher dispersion rate than many gemstones. What does that mean for us non-gemologists? The dispersion rate gauges how well a stone disperses light, and we already mentioned how the separation of light wavelengths creates colorful fire. Moissanite’s dispersion rate is over double that of a diamond, so you get more radiant fire in the form of green, red, blue, or purple flares that look particularly eye-catching under soft lighting. And moissanite looks just as good outdoors with its shimmering light display and hints of rainbow color!

Speaking of shimmer, moissanite also has a high refractive index which measures how much light returns and reflects through a stone. Diamonds have the highest refractive index of any colorless natural gemstone, but lab-created moissanite actually clocks in just a little higher than diamond for a touch more brilliance. Brilliance is the peanut butter to fire’s jelly, and it promotes those colorful flashes while creating contrast with a striking white sparkle of its own. In short, one without the other is just a dull sandwich–um, stone–and moissanite’s incredible fire works together with its high brilliance to create well-balanced beauty and its signature sparkle.

Both moissanite and diamond sparkle brilliantly, and choosing between them is a matter of taste! Diamonds are a great choice if you're focused on brilliance, but moissanite is a top pick for extra fire.

Does a moissanite's cut affect its fire? Moissanite gives off a high level of fire and brilliance in all cuts, but each one sparkles rather distinctly. Let’s look closer at how different cuts affect moissanite’s fiery sparkle based on how light travels through the stone.

Brilliant cut stones have several carefully cut facets that were tailormade for creating as much sparkle as possible.

The round brilliant is the sparkliest choice for moissanite, as this cut has 58 facets that enhance all fire, brilliance, and scintillation. No joke: this cut was perfected for the exact purpose of helping colorless stones like moissanite do what they do best: sparkle. You can even find round brilliant moissanites cut like hearts and arrows diamonds for a diamond-like sparkle and a sentimental touch! 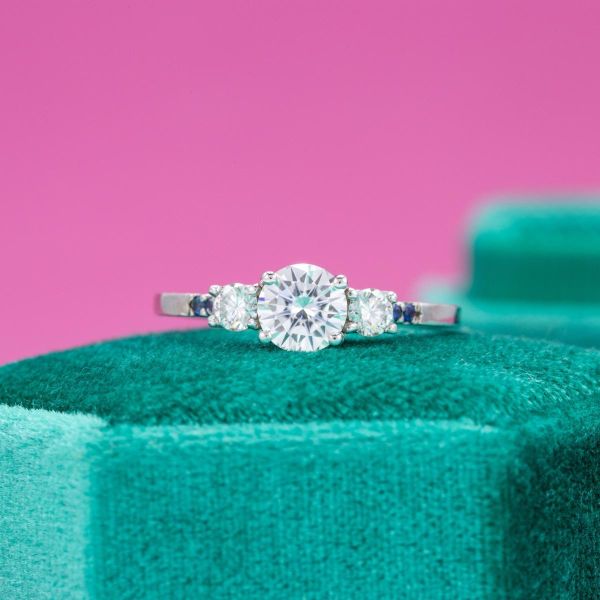 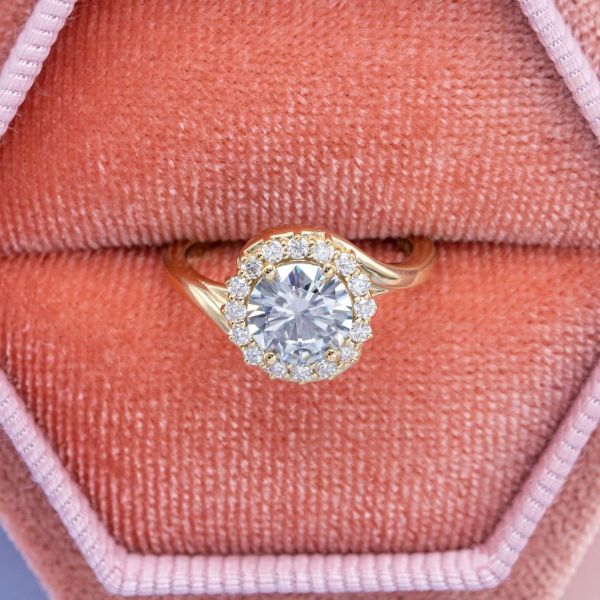 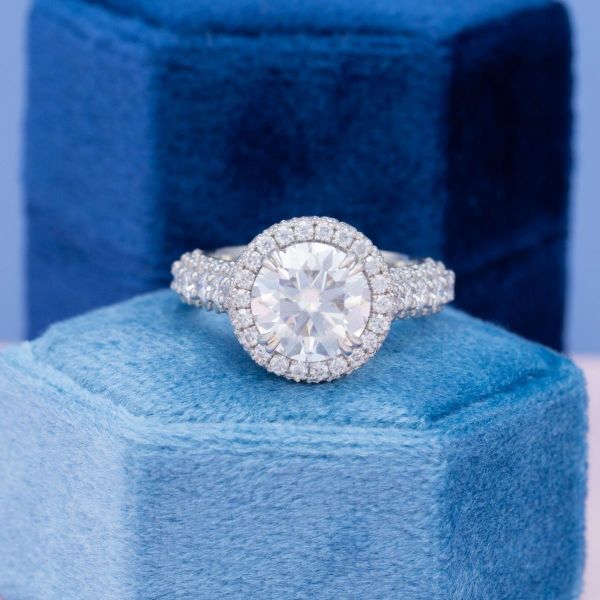 Elongated cuts like oval, marquise, and pear can actually make your stone appear larger due to the way the weight of the stone is distributed. Oval cuts in particular are similar to round brilliants when it comes to enhancing moissanite’s fire, and marquise and pear cuts have pointed ends for colorful fire sprinkled throughout each shape’s edges.

And the best part: choosing a moissanite in these cuts means you won’t have to worry as much about a pesky bow tie appearing on your stone! The “bow tie effect” refers to a dark, bow tie-shaped area that sometimes extends across the center of longer stones as a result of light loss or “extinction”. Round is the “optimal” cut for light return for both diamond and moissanite, but moissanite’s higher refractive index allows for cutting elongated shapes like this without the bow tie that you’ll generally see in diamonds. 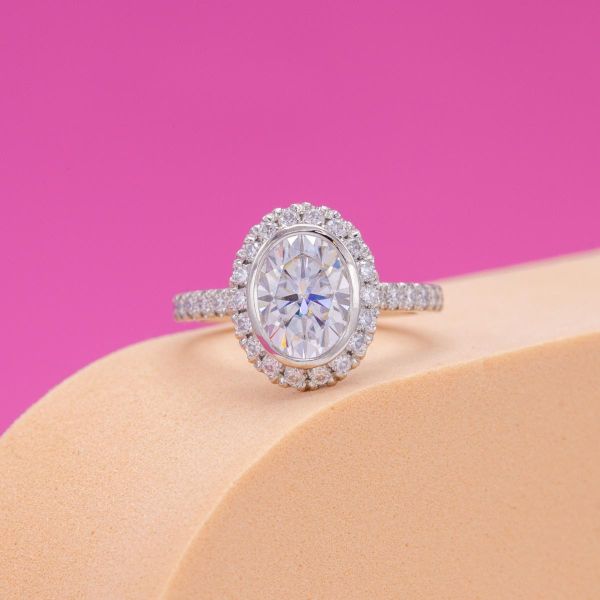 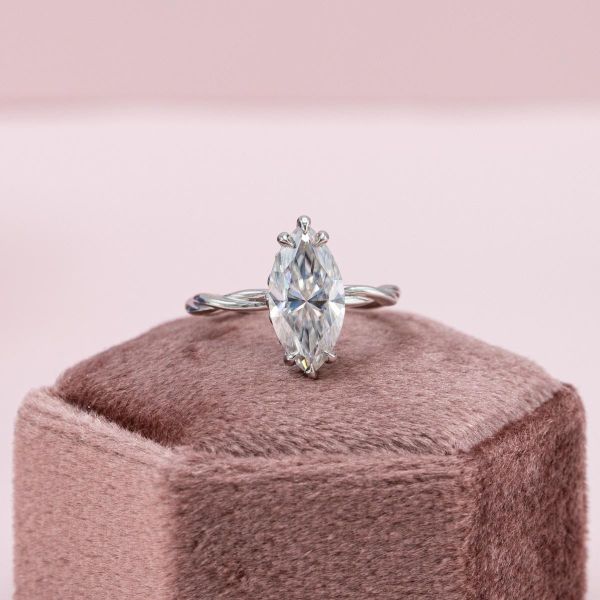 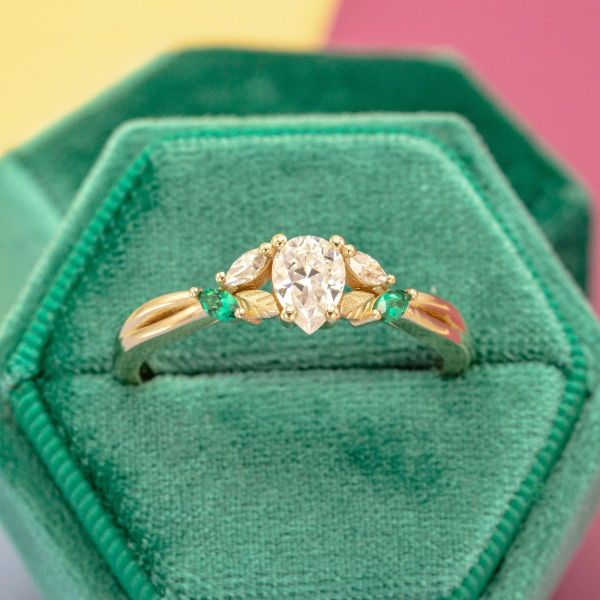 The princess cut is the top choice for a brilliant cut with a square silhouette, as this pyramid-shaped cut intensifies the brightness of the stone for ample fire. The princess cut creates a fractal sparkle that gives flashes of white and colored light for a “crushed ice” look. 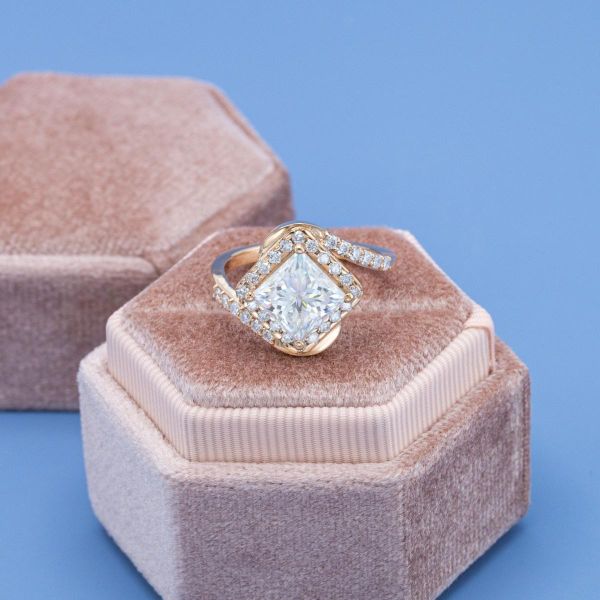 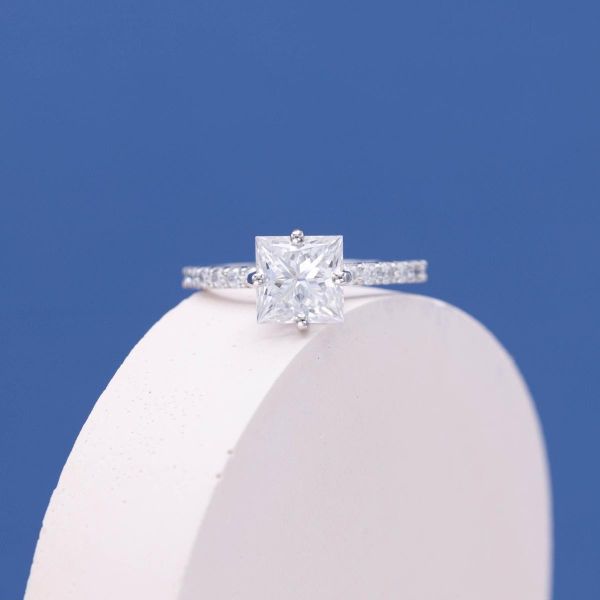 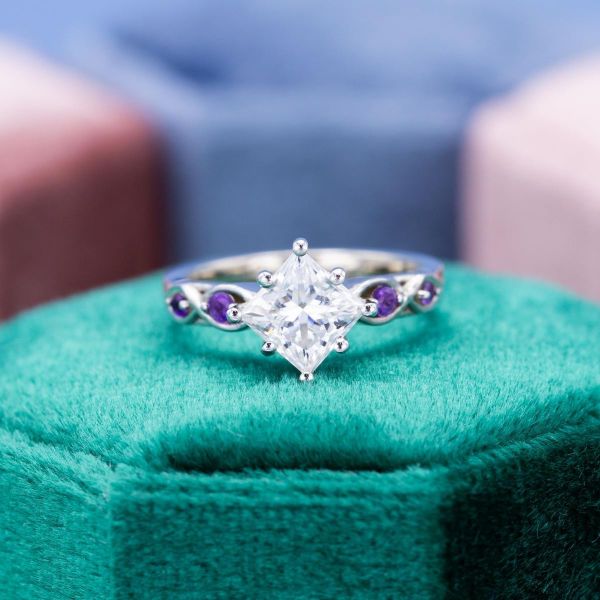 A happy medium between rounded and squared shapes, the cushion cut’s pillow-like appearance is a softer take on popular silhouettes. They’re also known as “antique squares” because their rounded corners are similar to antique diamond cuts. You can find cushion cuts in square and rectangular forms, but the end result is always the same: a moissanite with romantic sparkle and fire that suits both modern and vintage settings. 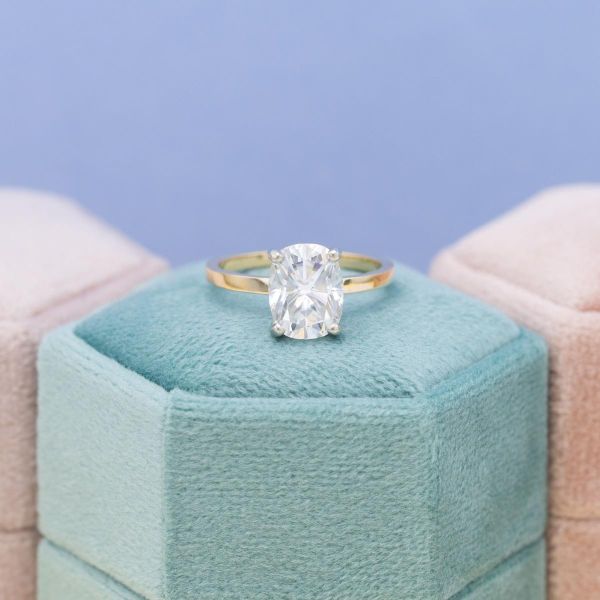 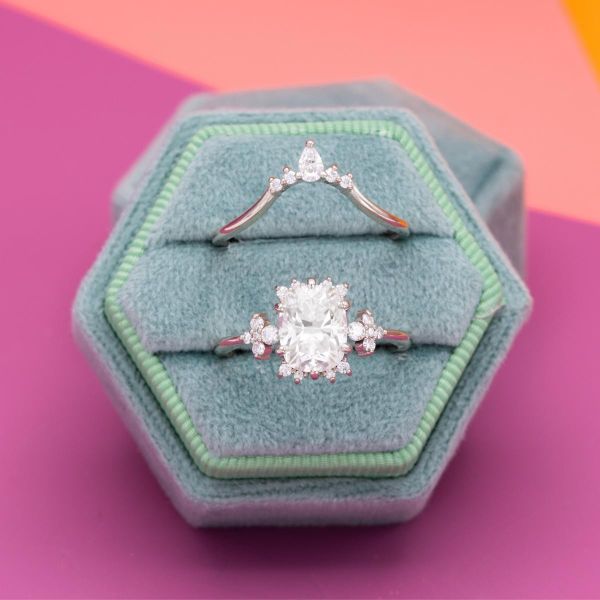 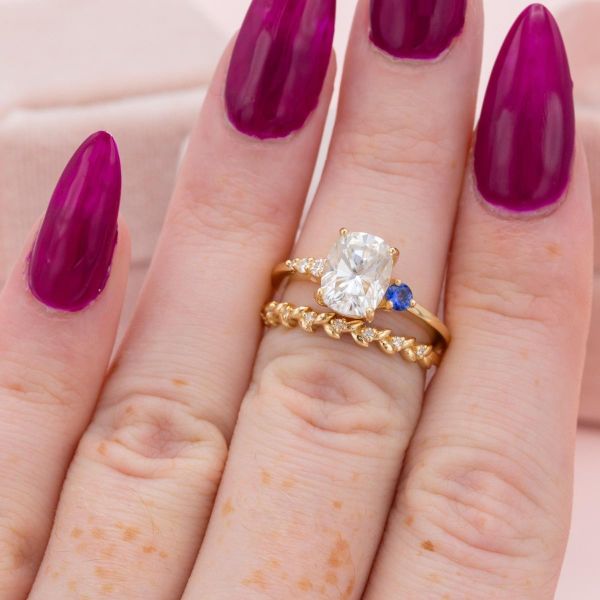 Step cut stones usually have a regal shine with subdued sparkle because of their rectangular, parallel facets. If you find the sparkle of brilliant cuts to be a bit much for your taste, step cuts feature large on/off flashes of light that are elegant and stylish!

Emerald cuts are pretty much the OG (or as we call it “Original Gemstone”) step cut and give off a subtle, mirror-like shine. However, an emerald cut is no match for moissanite’s fire, and you can still catch glimpses of colorful fire along the facets and in the cut corners of the stone. Fun fact: emerald moissanites are often cut a little wider than diamonds to keep that same bright sparkle. 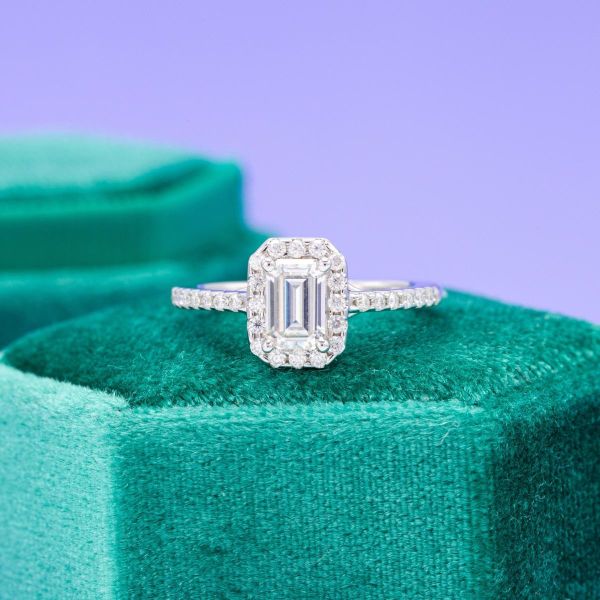 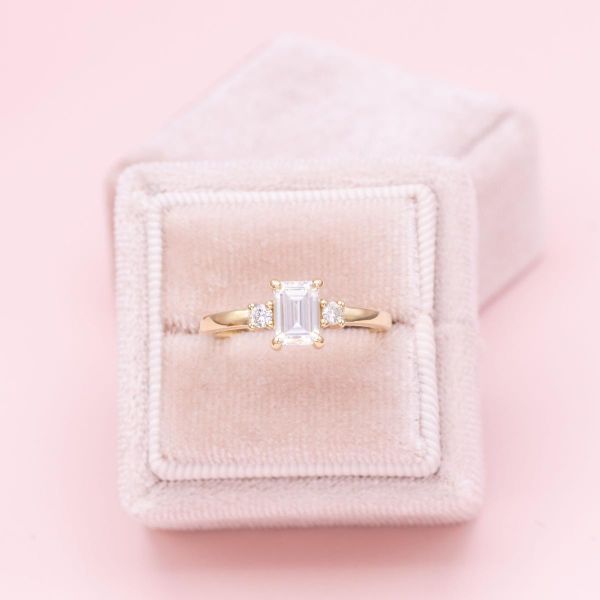 The Asscher cut—which is really a square version of the emerald cut—is a great choice for moissanite. A set of X-shaped facets run from the corners to the culet (point) of the stone and create a fiery show within an otherwise uniform step formation. It’s perfect for the graceful bride with a little rebellious streak! 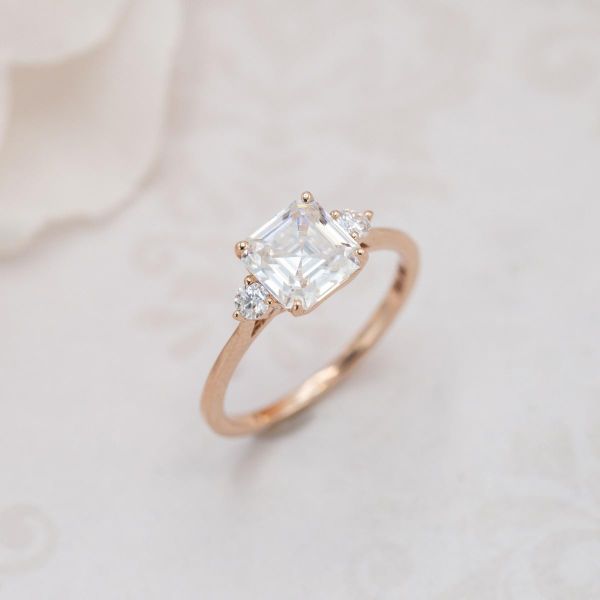 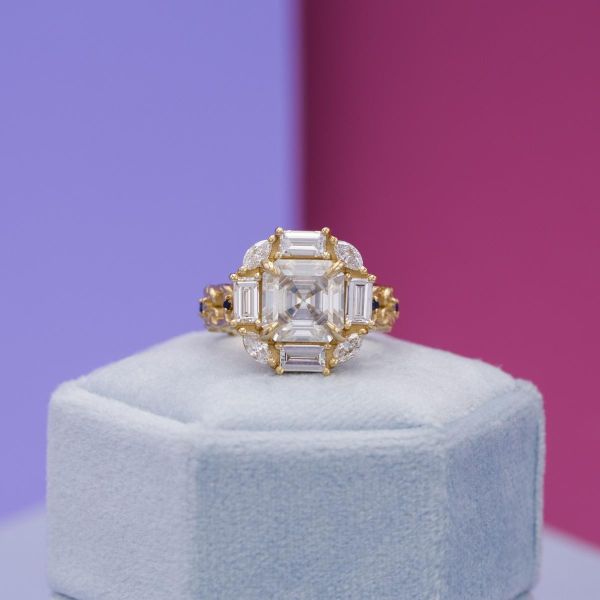 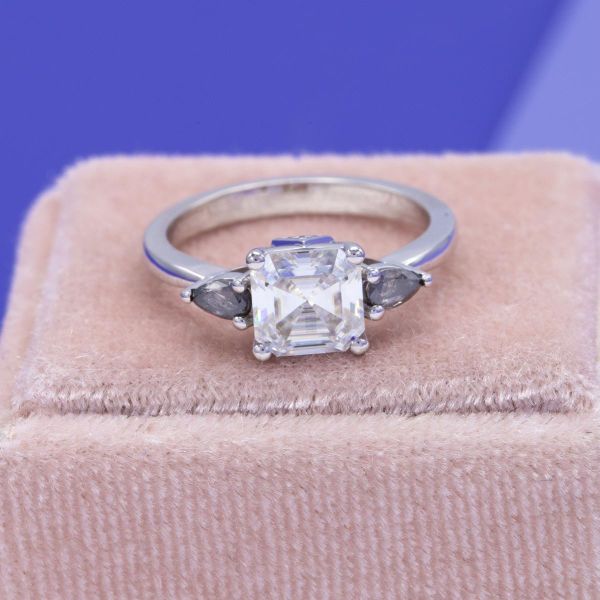 The baguette cut is a popular option for side stones because it has a great balance of mirror-like shine and a hint of fiery sparkle. We’re personally fond of pairing baguette moissanite side stones with a brilliant cut center stone to bring out their lovely fire. Choosing moissanite for your engagement ring

Moissanite’s fiery flashes of color may be all you’ve dreamed of for your engagement ring, but if that’s not the case then that’s ok too! Maybe you’d prefer a traditional diamond, or perhaps you’d like to show off your colorful personality with a playful opal or sophisticated sapphire. At any rate, if you’re looking for a colorless stone with well-balanced sparkle and a sassy streak, look no further than fiery moissanite! 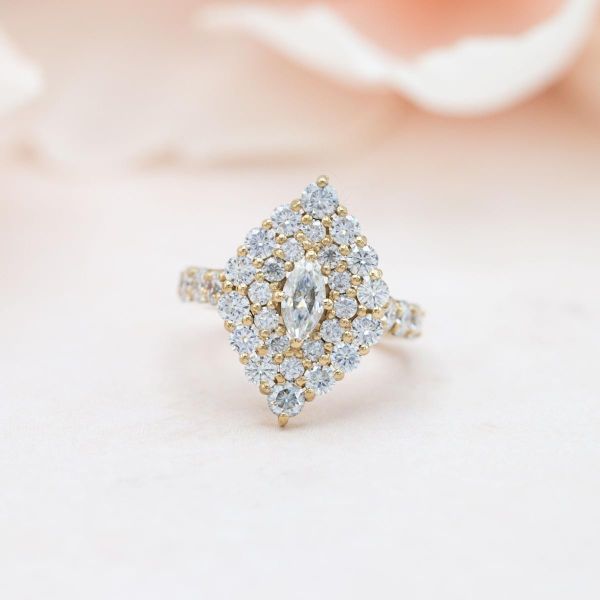 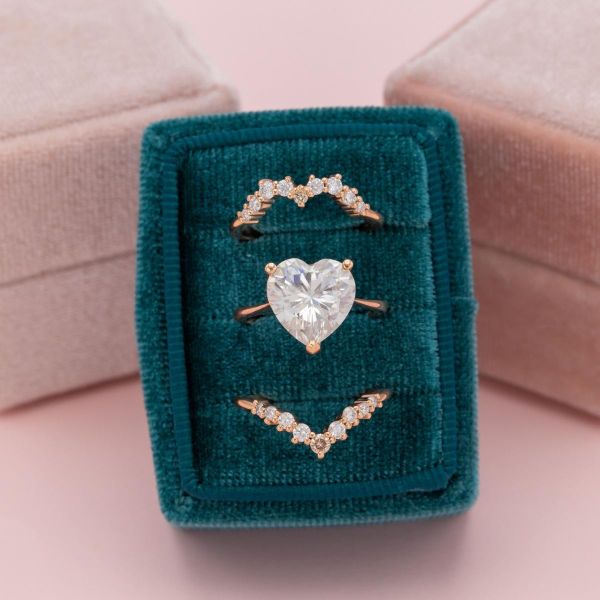 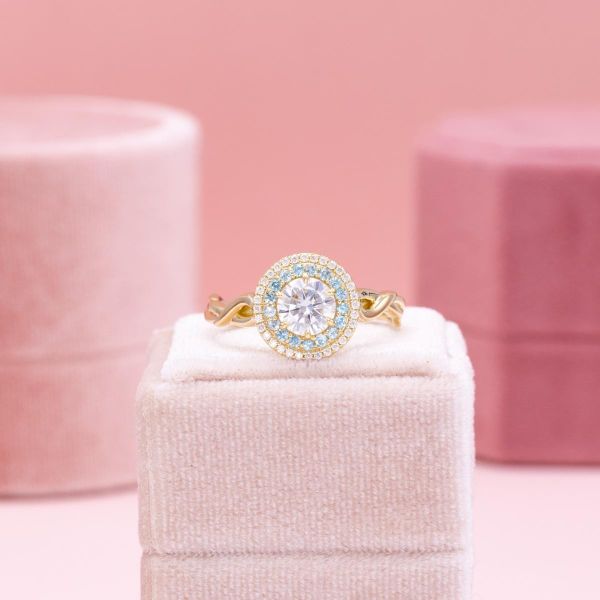 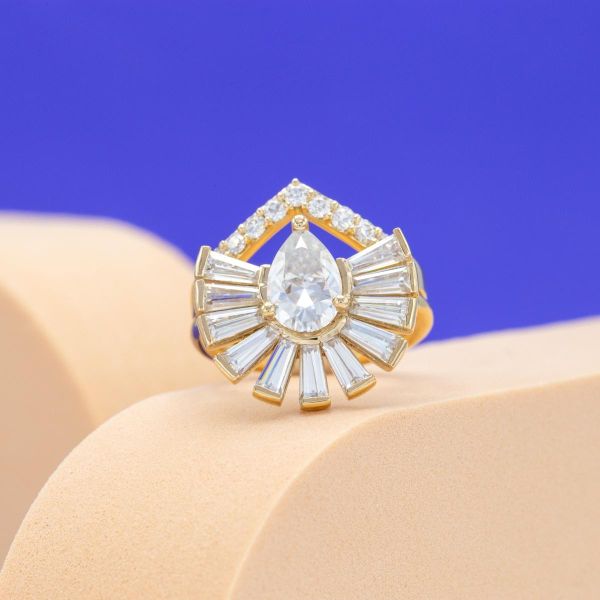 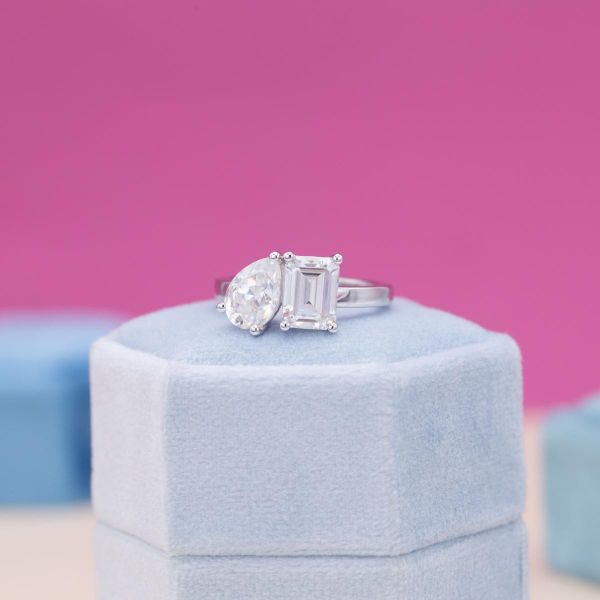 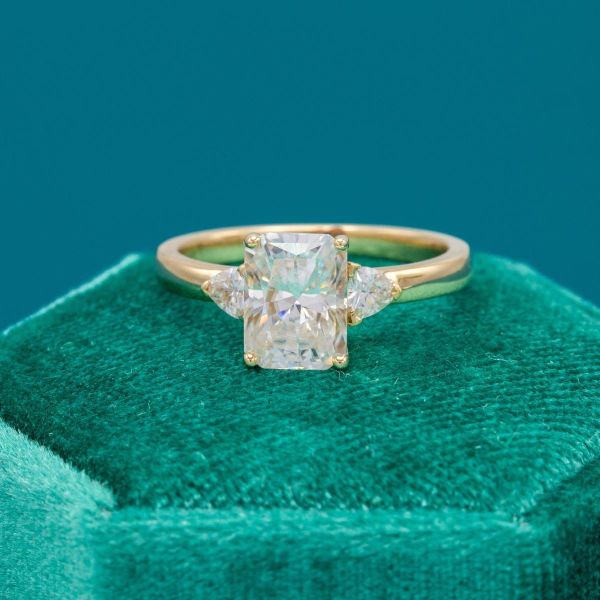