Design the perfect ring with the incomparable fire of moissanite.

You've likely heard of moissanite as an alternative to diamond. What do you need to know about this gem? Three things: it's made in a lab, it's all fire and brilliance, and it's affordable even in large sizes. 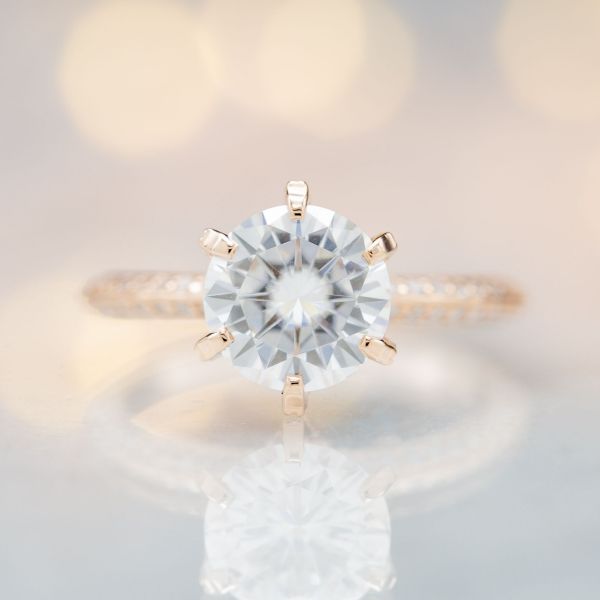 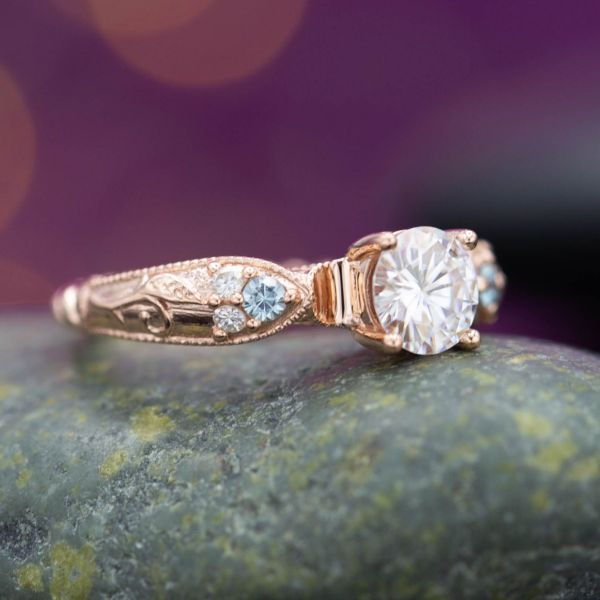 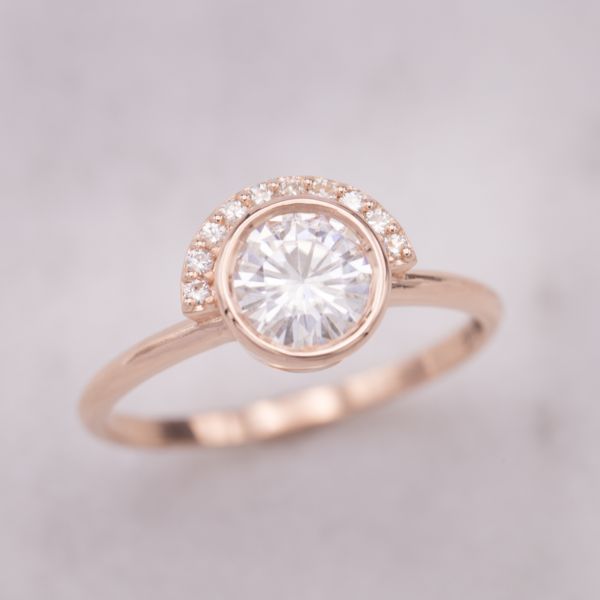 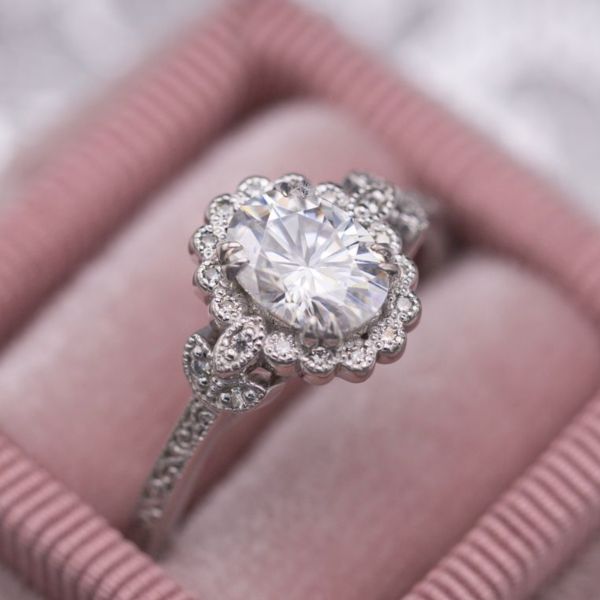 Discuss design ideas, options, budget, with your jewelry consultant - your guide to the custom experience.

See sketches and concept art designed just for you by our jewelry artists.

See It Come To Life

Visualize your piece with high resolution 3D renderings, and we'll adjust every detail until you tell us it's perfect.

Receive your custom piece, with the assurance it's been made to wear and last a lifetime.

We believe in lots and lots of hand-holding.

Our team of design consultants helps you figure out the details, explains your options, and guides you through each step of designing a custom engagement ring.

You don’t have to know what you want. Just what you like.

Our artists create design sketches and detailed 3D renderings to capture your vision in a perfect and personal design. And we'll tweak the details until you say it's exactly right.

We’re the experts, so you don’t have to be.

Will emerald cut moissanite still sparkle? What is a knife-edge shank? Is rose gold hypoallergenic?? Don't worry, we've got this. We'll make sure you know what matters and what doesn't, and we'll create the perfect ring. Together.

Get inspired by a few moissanite rings we recently designed for other customers. 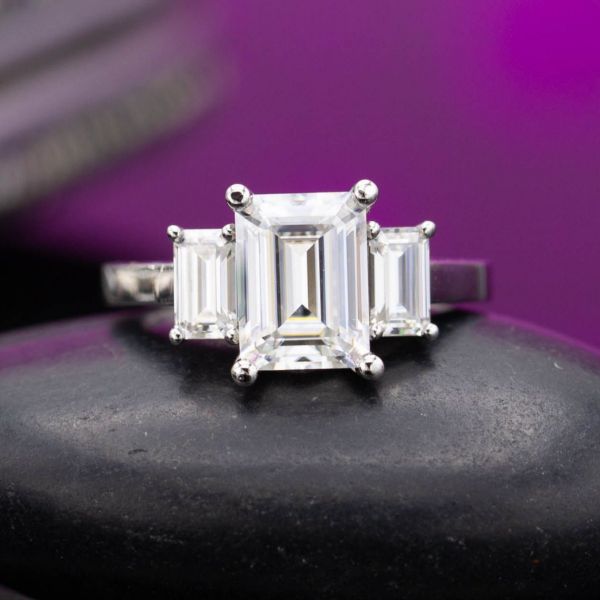 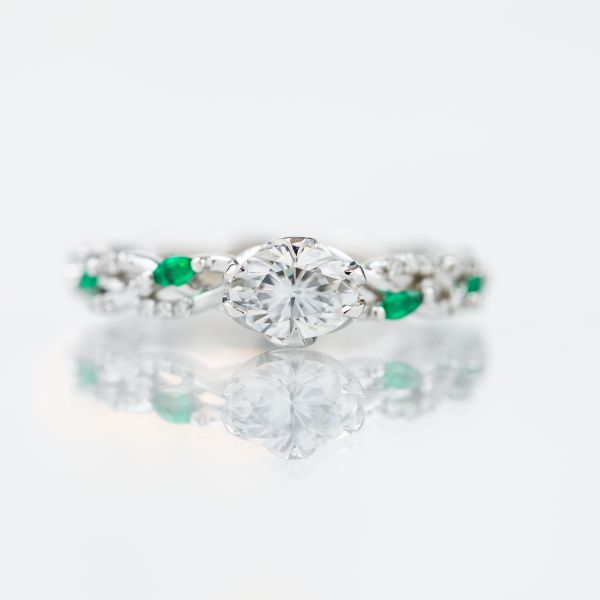 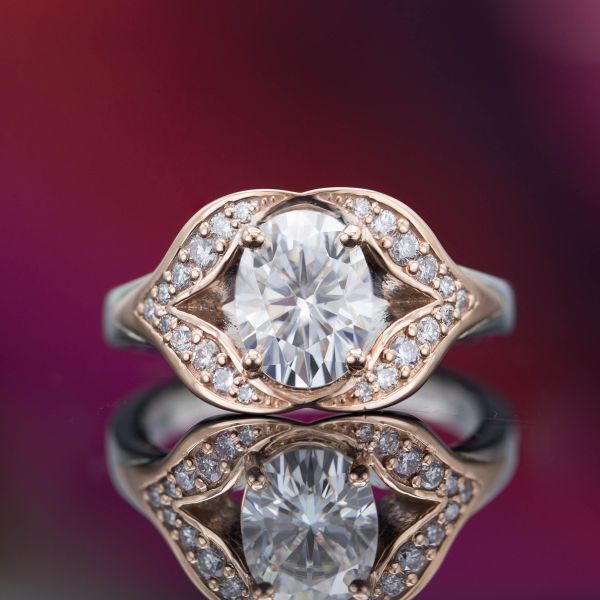 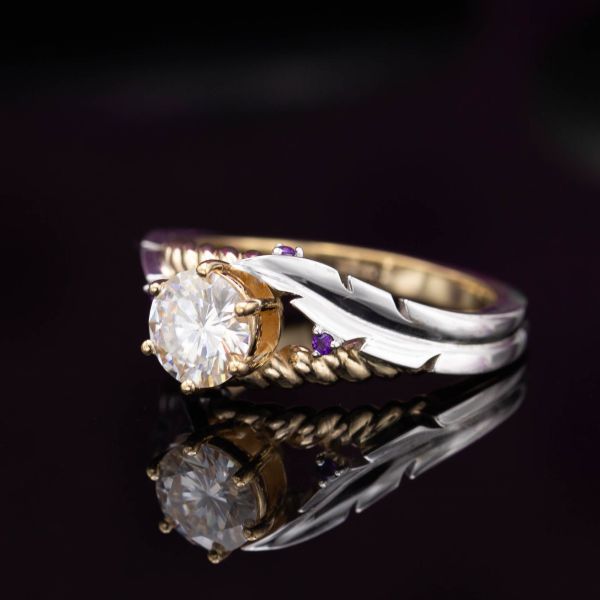 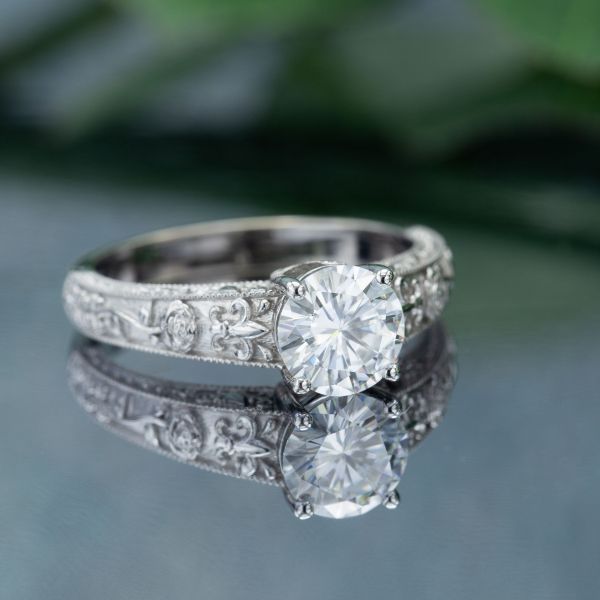 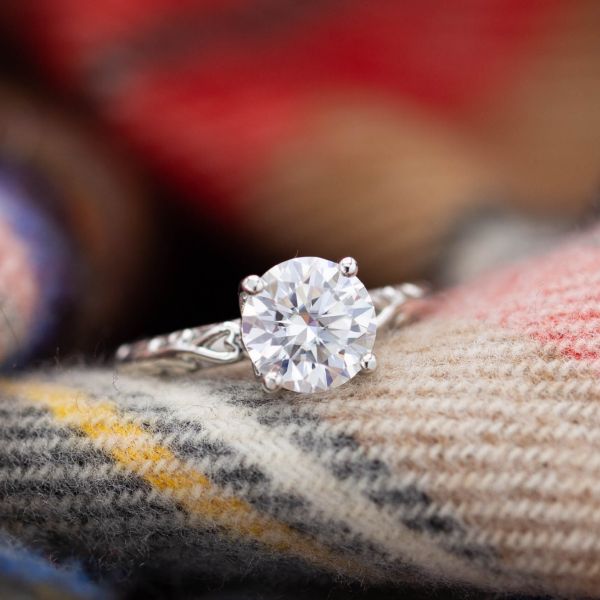 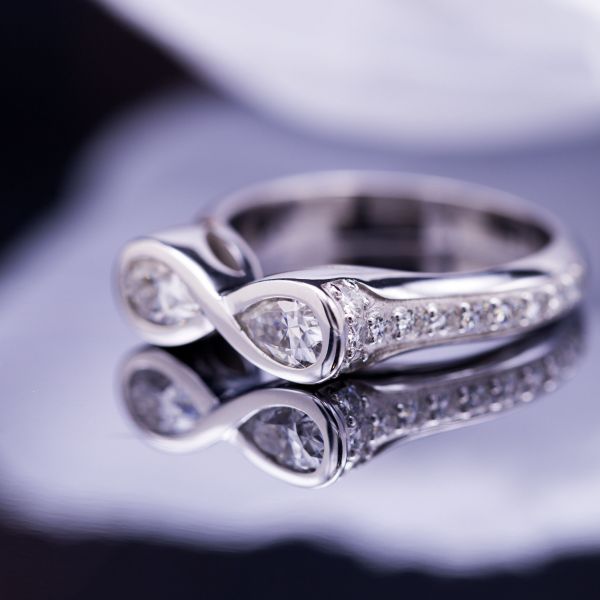 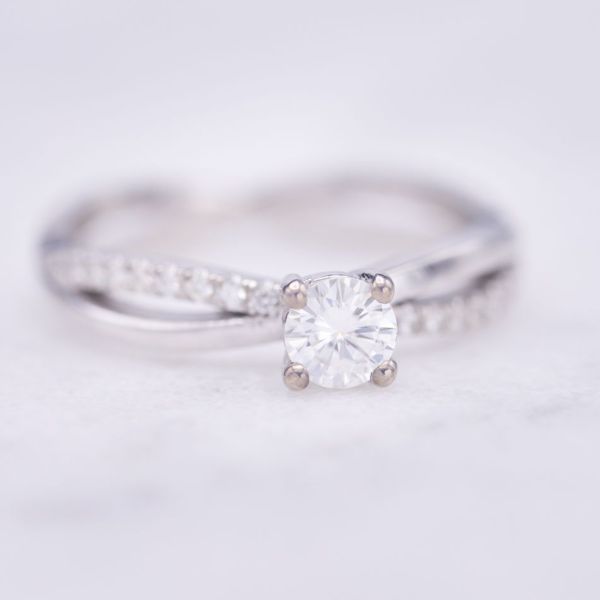 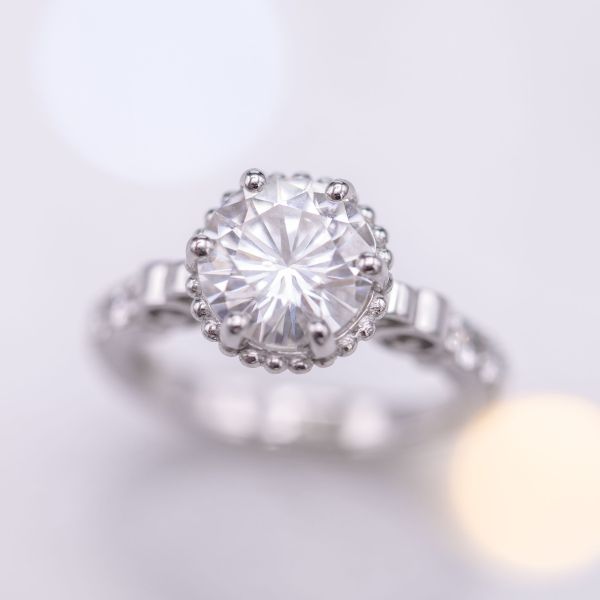 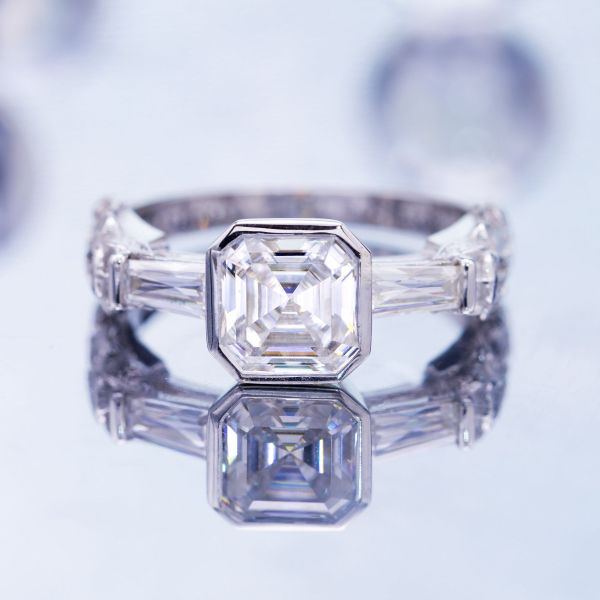 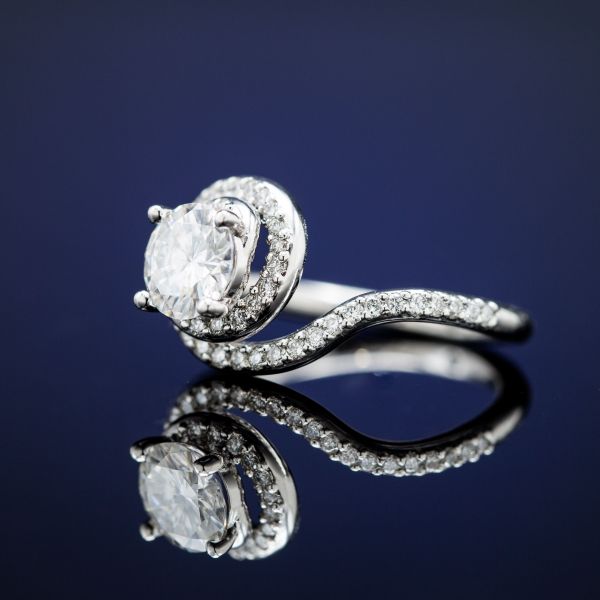 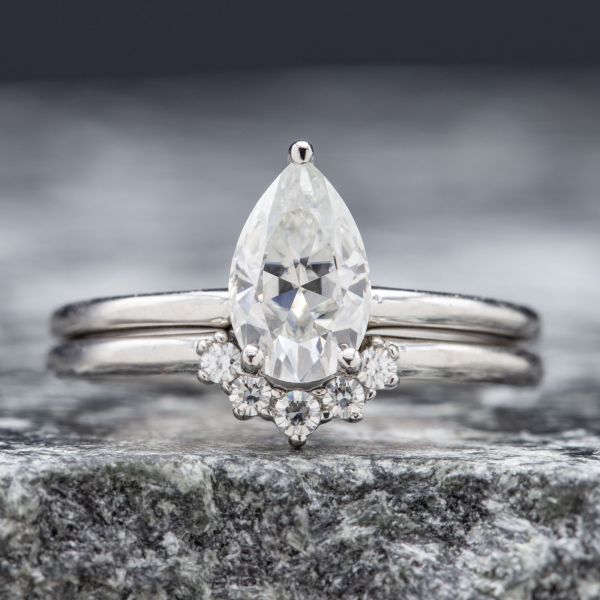 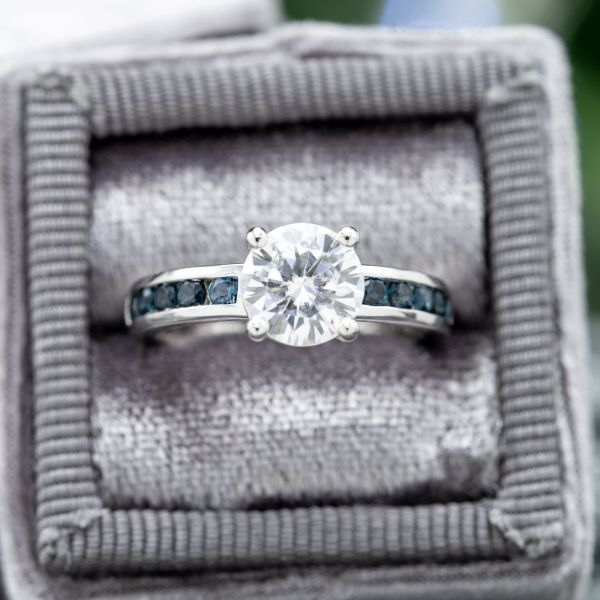 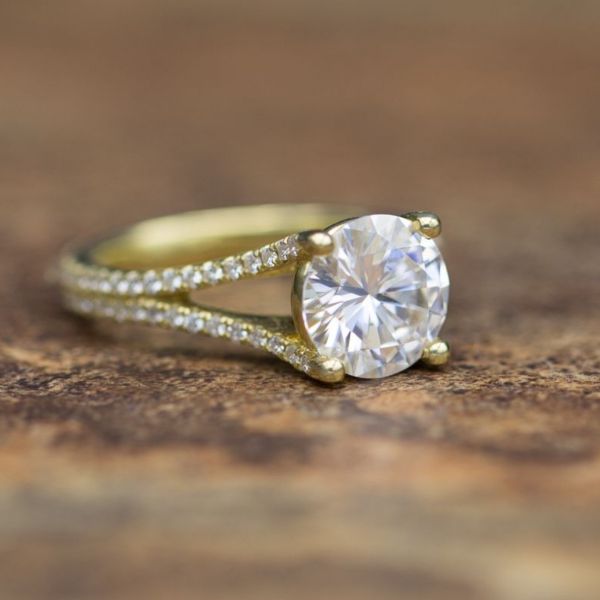 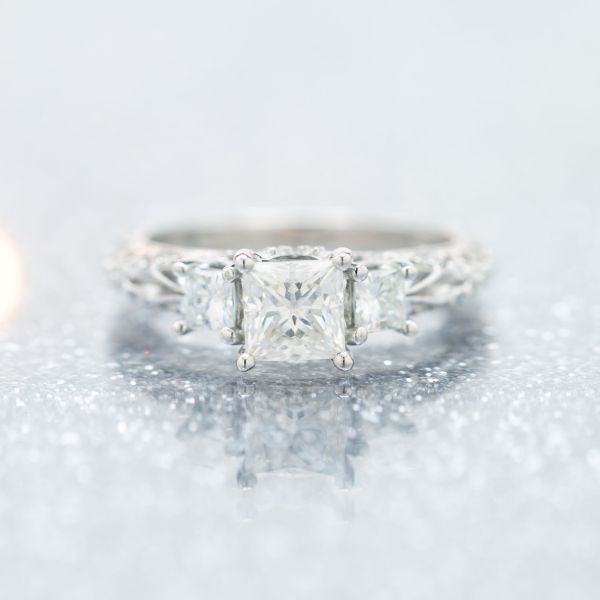 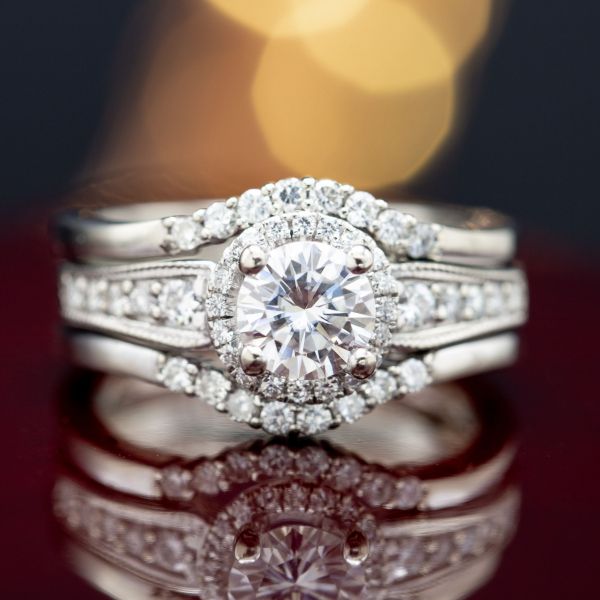 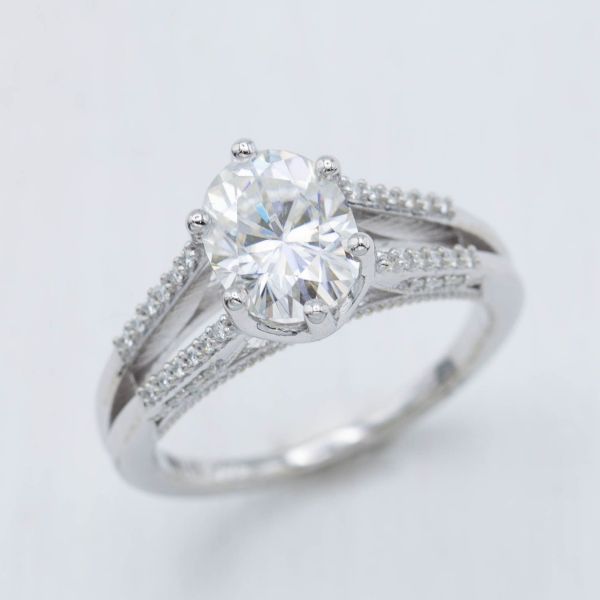 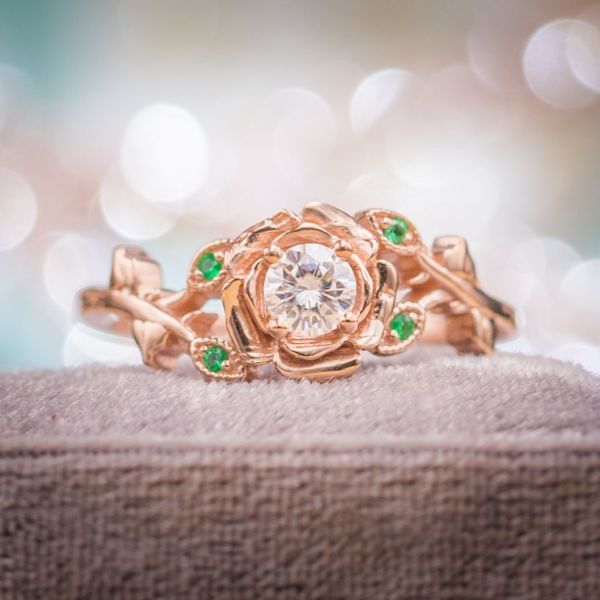 Is moissanite a good choice for an engagement ring?

Moissanite offers killer sparkle and durability — is it the right choice for your engagement ring?

Moissanite is well-known for its distinctive fire and shine, but what’s behind that bright sparkle?

How to pick the perfect moissanite

What is moissanite and where does it come from?

Moissanite is a colorless gem discovered in the late 19th century by Henri Moissan, after whom the gem is named. He found traces of it in a crater from an ancient meteor impact site in Arizona and determined that he had found a new mineral called silicone carbide. Only tiny amounts of the material have been found in nature, so it was only a century later that the material found its place in jewelry design after techniques were developed for manufacturing the gem in a lab.

Moissanite is often considered to be a diamond alternative, because it is colorless, durable and sparkly, but far less expensive than diamond. Its the second-hardest gemstone (a 9.25 on the Mohs hardness scale, putting it behind diamond but just ahead of sapphire and ruby), which makes it a great choice for a daily wear item like an engagement ring. And its origin in a lab means that you can expect a nearly flawless gem in terms of color and clarity. For some, it's also reassuring to know that the stone's origins are free from any of the ethical concerns that can arise with gemstone mining.

So, is moissanite just an inexpensive diamond alternative? No. Many people choose moissanite because they love its distinct character, while some would argue that moissanite is obviously different from diamond because of these distinctions. You can expect moissanite to give off much more sparkle, or "fire," than a diamond. The dispersion of moissanite is higher than that of diamond, and this is the characteristic that causes light to split into its distinct color wavelengths and reflect back at the eye as flashes of color from across the spectrum. Moissanite also has a higher refractive index, which tends to reinforce its brilliance. So the sparkle and fire of moissanite is much higher.

We recommend moissanite for those who loves a ton of sparkle, for someone who wants the look of diamond at a fraction of the cost, or for someone concerned about the environmental and ethical implications of diamond mining.

How long does a project take?

Typically, your custom piece will be in your hands 2-4 weeks after we've finalized your design. However, because each project is different, the time it takes to complete your project may vary. Here's a rough breakdown of how long each part of our process takes:

Design: As long as it takes for you to tell us it's perfect

When it comes to creating your design, we'll work at your pace. Some customers only need to exchange a few messages with us - we'll often be ready to make their piece within a few days. Others may prefer to design and iterate with us over many weeks, or even months.

Once you've approved a design, we'll manufacture your piece, finishing all the details by hand. When it's ready, we'll send you photographs of your finished piece so you can give us your seal of approval before we ship it to you.

We offer free shipping within the US via FedEx or USPS, and we ship international packages via DHL Worldwide Express, one of the fastest services available. Depending on location, international shipments can sometimes be delayed by local customs for inspection, which can extend the delivery time.

How much will my ring cost?

In general, our custom rings are the same price as similar rings off-the-shelf ('similar' meaning a comparable selection of metals and gemstones used, which are the biggest factors in price). Our aim is to make high-quality custom designs accessible to everyone.

Each ring we produce starts off as a brand new concept. Because of that, it’s difficult to know how much a piece is going to cost without knowing a bit more about the idea you have in mind.

The easiest way to figure out how much your ring will cost is to start a consultation with us and let our team know what you're looking for - we can provide an estimate with only a few details.

When do I get to see a design? Do I have to pay first?

There's no charge to discuss your design, and price out options with our team. In many cases, our jewelry designers will also create artistic sketches of our design concepts for your piece. We request a deposit prior to producing 3D models and renderings of your design and that deposit goes toward the final cost of producing your piece.

Where do your gems come from? Can I browse your inventory?

Unlike most jewelers, we don't keep a huge inventory of gems. Since every piece we make is custom, we prefer to source each stone individually, to suit the design and the specific needs of each customer.

As with the rest of our design process, our team will guide you through the gem selection process. We start by figuring out what's important to you in a gemstone, whether it's budget, origin, size, color, or simply the overall look. With that in mind, we research and prepare a set of options that we think would work for you. Some come from our curated collection, others from a network of trusted suppliers, and in some cases, we may opt to have an expert lapidary custom cut your gem. You'll make the final decision on the option that best meets your needs, and we'll make sure you have everything you need to make the best choice.

Our primary goal with gemstones is transparency. The center stone is an essential part of the look of your ring and it can be a big financial decision. Trust is built on honest communication, so we work hard to give you all the information you need to make a confident choice.

Do you offer a warranty?

We stand behind our jewelry 100% and we offer a comprehensive set of warranties so that you can purchase with confidence.

We guarantee our workmanship and take responsibility for any structural defects.

All the materials (metals, diamonds, and gemstones) we sell are authentic and properly specified in your proposal agreement.

If any small accent gems (<$100 value) break or fall out of their settings in the first year after we create the ring or within a year of us performing maintenance on the ring, we’ll replace them free of charge.

Read more about our warranties.

Ready To Design With Us?