Login Get Started!
Get started

Get inspired by January's birthstone — garnet

This article is part of our Birthstone Rings series, where we share the beautiful and varied ways our customers have featured birthstones in their rings.

For most, garnet brings to mind the deep red of Mozambique garnet, but there are actually a lot of garnet varieties in a broad range of colors. These mineral varieties have names like pyrope, almandine, spessartite, tsavorite, and others. In fact, the two most common red garnets used for jewelry (Mozambique and Rhodolite garnet) are industry terms for almandine and pyrope garnets (and naturally occurring blends of the two). It's all a bit confusing, isn't it? The important thing is that garnets can be found in a huge range of colors, and that's a wonderful benefit for those with January birthdays.

Garnet has very good wearability characteristics for a daily-wear ring and most garnet varieties are quite affordable even in larger sizes. Whether it's a classic deep red or one of the less common colors, check out some of the rings we collected below to inspire you with the possibilities of a garnet ring.

This vintage-inspired design shows why garnet is a great budget alternative for a ruby center stone. We included chevron detailing on the band and understated floral inspiration into the petals and leaf-like gem settings around the center stone. The center stone is a perfect Mozambique garnet to reinforce the rose-inspired center setting. This engagement ring's center stone shows the slight orange hue that gives Mozambique garnet its distinctive color. It's a deep red that, unlike ruby, has very little pink or violet mixed into the color. In this ring's design, we bring out even more of the vivid color by setting it against the shine of white gold, and contrasting the color with the light green of peridot. So, we had nature inspiration and peridot accent gems in the rings above... what happens if we bring the two together? Well, this cluster ring does just that. But, of course, it has almost nothing else in common with the designs above. We designed this ring in the style of a modern cluster, with the garnet as a larger 'anchor' stone for the asymmetrical arrangement. Peridot and blue topaz add color and shape variety, and a bypass style band has two small leaf accents to keep the look sleek and modern. Other Shades of Garnet

Of course, as we mentioned above, you're not limited to that classic red garnet color. Maybe you're more interested in a raspberry red, with the violet or pink color that's common in many rubies. That's the classic color of Rhodolite garnet. In this nature-inspired setting we designed, rhodolite garnet accents on the band show even more of that violet-pink hue and draw out that shade in the center stone. Tsavorite garnet takes us well away from the red part of the color spectrum into a vivid green. In this whimsical turtle engagement ring, the pear cut tsavorite garnet draws the eye with its vibrant color, and curves perfectly to form the turtle's shell. 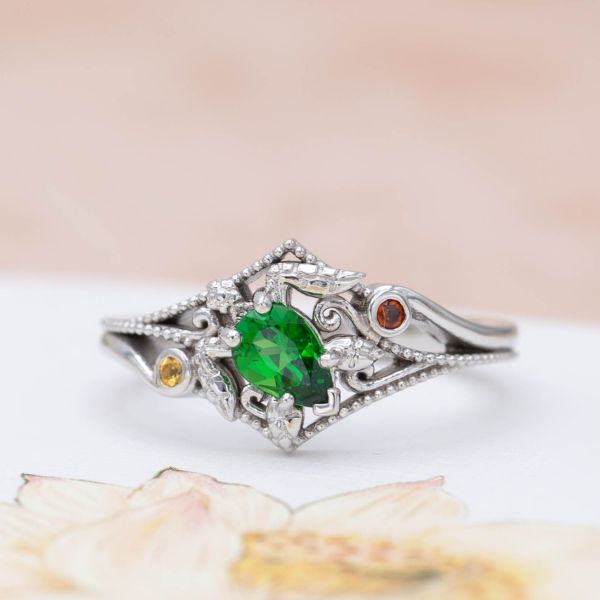 Here's a hessonite garnet in a bold, Deco-inspired ring. Hessonite garnet also comes in more than one color, but in the orange part of the color spectrum, it often leans toward an amber brownish orange. This is one our customer brought to us, and we designed a ring with distinctive geometry framing the intense orange of their center stone. And, in a similar fiery orange, here's a spessartite garnet. It's the perfect center stone for this sunflower engagement ring, bringing a fiery warmth that stands out from its gold setting, and brings to mind the earthy warmth those giant flowers evoke.