Ten of our favorite designs starring the unique, natural beauty of moss agate.

This article is part of our Exploring Gemstones series, where we draw inspiration from the incredible world of gems.

What is Moss Agate? A center stone for nature lovers!

Isn't it incredible how fast moss agate went from being a gem you'd never heard of to a trendy center stone choice showing up all over Pinterest? We love the way the internet makes it possible for people to discover unusual treasures from the wonderful world of gems!

So, what is moss agate? Let's start with the broader category: agate is a popular semi-precious gemstone that's been used in jewelry for pretty much as long as anyone's been making jewelry. It's a form of chalcedony which, in turn, is a type of quartz. That makes it a relative of onyx (also a form of chalcedony) and amethyst and citrine (both varieties of quartz). Following all of this? Don't worry, we won't quiz you, you can just sit back and enjoy the pretty pictures of this gem. What makes agate so popular is that it's found in a wide variety of vibrant colors, often displaying multiple colors in exquisite banded patterns.

Moss agate refers to a type of agate that contains networks of green inclusions trapped inside the stone. These inclusions can look like mossy vines, green webs, puffs of green smoke, or moss-covered branches. You might also hear terms like plume agate or dendritic agate used to describe some of these gems. What they all have in common are their unique arrangements of vivid green inclusions throughout a semi-translucent stone. 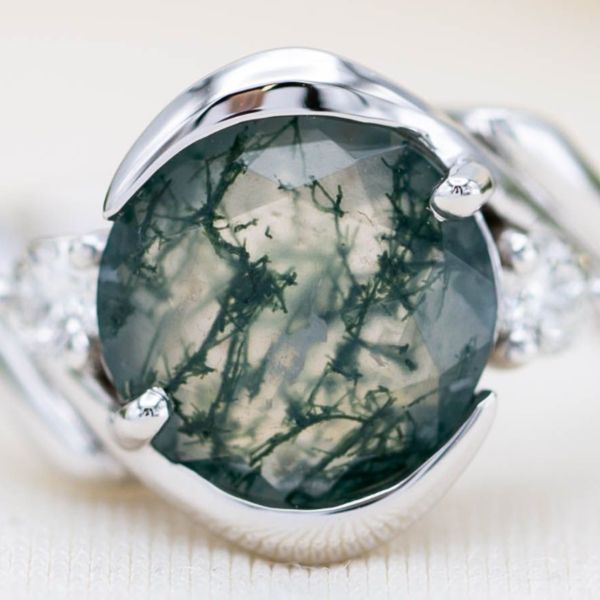 This stone is absolutely perfect for lovers of plant life and the outdoors. Not only does the verdant green of the stone remind the eye of vegetation, but the uniqueness of each stone is a wonderful reminder of nature's beauty. No two are alike. You can see why a company obsessed with custom-designed rings would love this particular center stone choice!

Is moss agate a good choice for a center stone?

Absolutely! Agate is durable and will hold up well as a center stone, and moss agate is no exception. With a typical hardness of 7 on the Mohs scale, it is durable enough for daily wear. Remember all of those related gems above? If you'd be comfortable wearing amethyst or onyx as a center stone, you can feel equally confident with moss agate.

You probably didn't come here for a mineralogy lesson -- you want to see some moss agate engagement rings! So, without further ado, here are ten recent designs we created with this wonderful center stone.

Perfectly showcased in a kite-cut, this moss agate is translucent and features elegant tendrils of vibrant green. Moonstone side stones echo the misty, translucent agate. And the design we created for this customer plays with wonderful contrast by balancing the organic patterns of the center stone with the crisp geometry of the center setting. 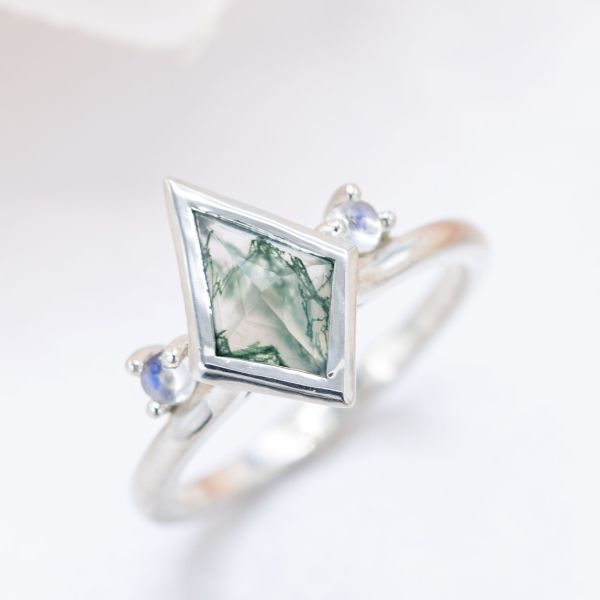 Another kite cut! For this design, we leaned into the nature theme with a vining, leafy band. The moonstone our gem experts found for this customer has a more green body, with even darker green inclusion tendrils vining throughout. 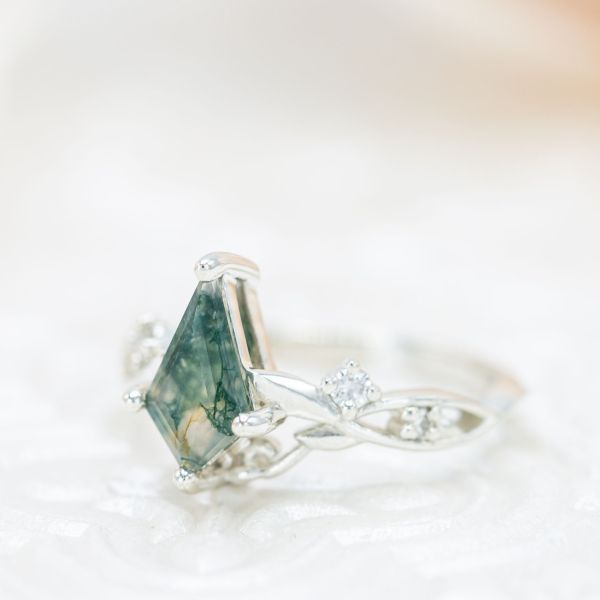 This gorgeous round moss agate is definitely one of our favorites -- there's so much depth in this stone, as you can see the vivid network of green inclusions near the surface, with plenty more lurking deeper inside the stone. It's beautifully showcased in the modern curves we designed for this ring Brandon created for Christina. 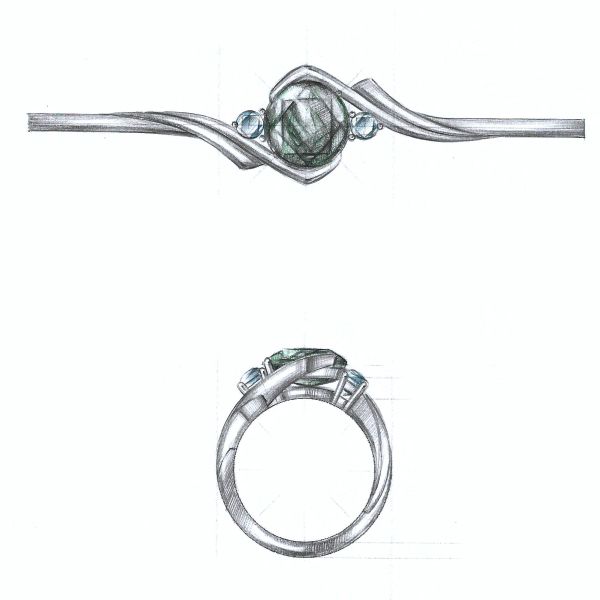 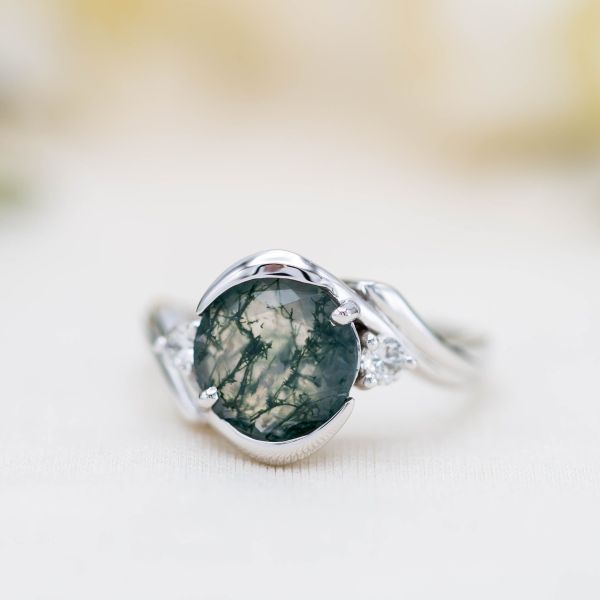 Here are two very different looks that show a different side of moss agate. These stones are less translucent, bringing out the look of a snowy forest with the pairing of white and jade green. Two similar pear cut agates, two very different designs! One is set in a textured white gold band, playing with geometry again as the organic green curves contrast with clean, repeating lines on the band. The other embraces the fluid curves, winding tendrils of rose gold into Celtic knots around the agate. 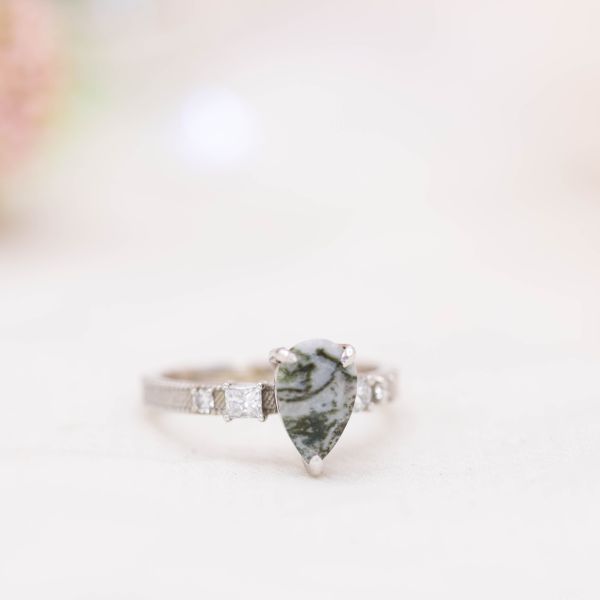 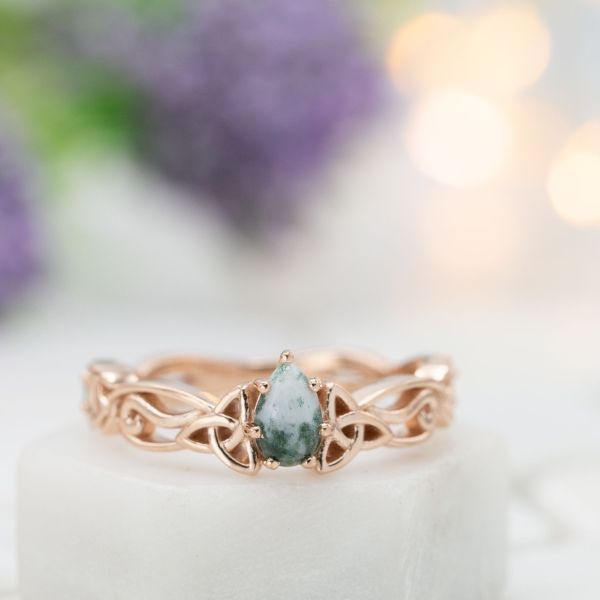 To our eye, this one looks like fern fronds, or fur tree branches. Vibrant and green, like a little forest perfectly preserved on your finger. And we love that the green isn't perfectly balanced! In a symmetrical rose gold ring, having more intense green tendrils on one side gives a touch of the wildness of nature to the ring! 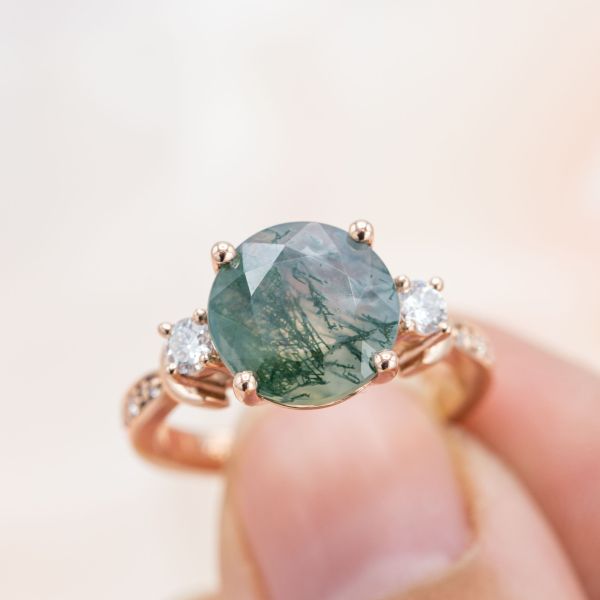 Green and gold always look good together -- that's why gold emerald rings have been so popular for so long. And this design is no exception. Haven asked us to include green sapphire side stones, which play up the natural greens of this ring. A whole spectrum of green hues across the three-stone arrangement! 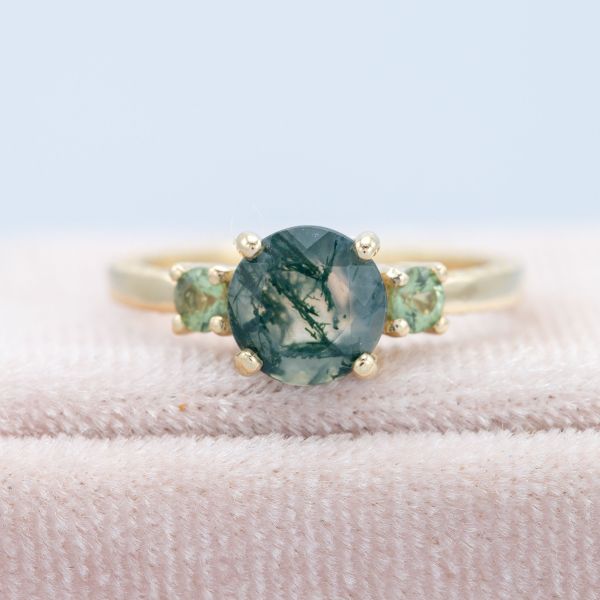 We wanted to show these two side by side, since they reveal two such distinct faces of moss agate! The first is bright, wide open, with wisps of green smoke snaking through. The second is intense, a dense web of vivid greens. And would it be immodest to mention how much we love these two showstopper designs we created for Natalie and Joel? 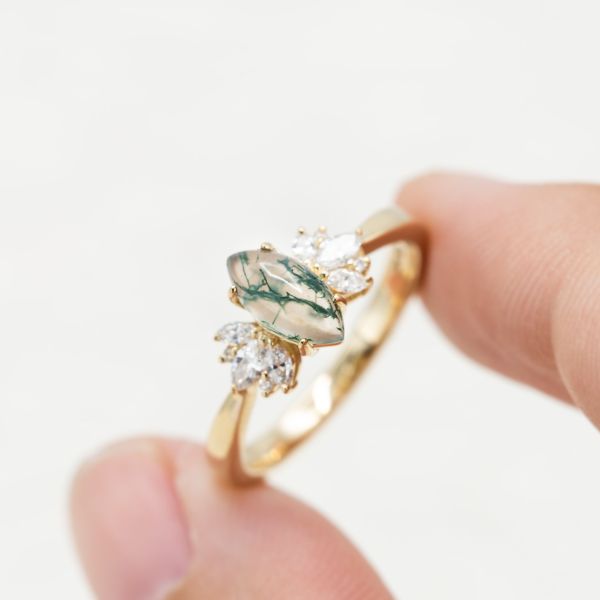 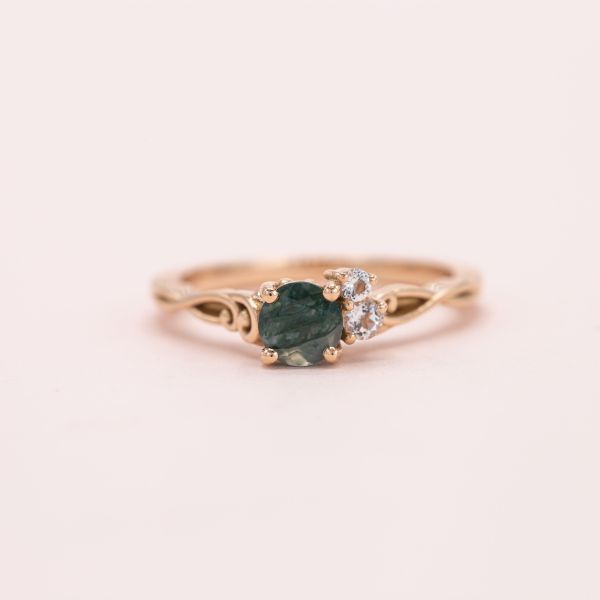 Perfectly elegant simplicity for our final ring in this roundup. A delicate, minimal claw prong setting that puts all of the focus on the gorgeous moss agate center stone. And there's that combination of green and gold again! 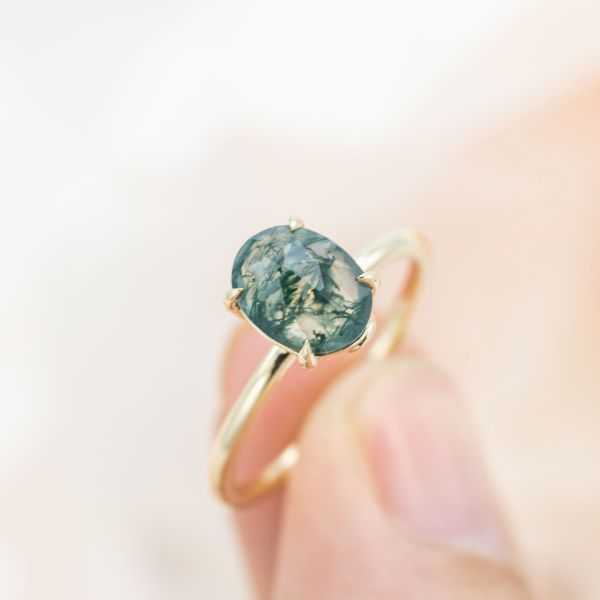 Design your own moss agate ring

Love this unique center stone as much as we do? Get in touch with our team so our designers can help you create the perfect ring and our gem experts can find the knockout moss agate to star in your one-of-a-kind design!

Ready To Design With Us?